Badrinath is a Hindu holy town and a nagar panchayat in Chamoli district in the state of Uttarakhand, India. Badrinath temple (Badrinarayan temple), is situated along the Alaknanda river, in the hill town of Badrinath. It is the most important of the four sites in India’s Char Dham pilgrimage. 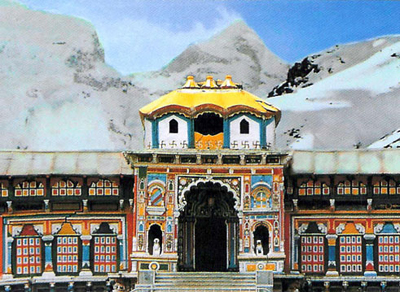 The Badrinath temple is the main attraction in the town. According to legend Shankara discovered a black stone image of Lord Badrinarayan made of Saligram stone in the Alaknanda River. He originally enshrined it in a cave near the Tapt Kund hot springs. In the sixteenth century, the King of Garhwal moved the murti to the present temple. The temple has undergone several major renovations because of age and damage by avalanche. The temple is approximately 50 ft (15 m) tall with a small cupola on top, covered with a gold gilt roof. The facade is built of stone, with arched windows. A broad stairway leads up to a tall arched gateway, which is the main entrance. The architecture resembles a Buddhist vihara (temple), with the brightly painted facade also more typical of Buddhist temples. Just inside is the mandapa, a large pillared hall that leads to the garbha grha, or main shrine area. The walls and pillars of the mandapa are covered with intricate carvings. Badrinath Temple was originally built by King Pururava, and none other than the great artisan of gods, Vishwakarma, artistically carved it. Much later in 8th century, well-known Hindu reformist Adi Shankaracharya re-enshrined the temple. 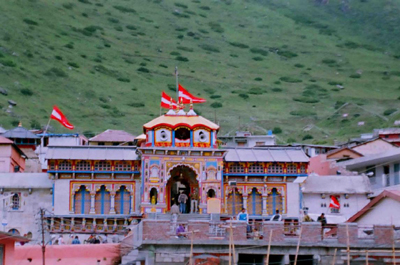 The temple architecture puts a fabulous semblance for the eyes of the on looker. It is divided into three segments namely the ‘Garbha Griha’ or the sanctum sanctorum, the ‘Darshan Mandap’ the Ritual Hall and the ‘Sabha Mandap’ or the Devotees Assembly Hall. The whole temple complex has 15-idols, of which the statue of Lord Badri or Vishnu, subtly chiseled from Black stone, simply catches the imagination by awe and reverence. Badrinath Temple open every year in April and May, and closes in third week of November. The temple is opened for the devotees from 0430 hrs till 1300 hrs. It opens again from 1600 hrs to 2100 hrs after the Rawal recites Geet Govind. Rawal is the celibate temple administrator or the Pujari who is well versed in performing special morning prayers, Abhishek and Mahaabhishek; and evening Pujas such as Aarti and Geet Govind in Sanskrit respectively. The individual devotees can also carry out sacred oblation. And every Puja ceremony must be carried out only after taking holy dip in Tapta Kund.