Lake Manasarovar, Mapam Yumco, Mapam Yum Co, Mapham Yu or Manasa Sarovar/Lake Manas is a fresh-water lake in Tibet Autonomous 800 kilometers (500 mi) from Lhasa. To the west of Lake Manasa Sarovar is Lake Rakshastal and towards the north is Mount. KailashLake Manasarovar lies at 4,556 m (14947.5 ft) above mean sea level, making it the highest freshwater lake in the world. Its depth is 90 m (300 ft) and its surface area is 320 square kilometres (120 sq mi) and is connected to nearby Lake Rakshastal by the natural Ganga Chhu channel. Manasarovar is the source of the Sutlej River which is the easternmost large tributary of the Indus. According to Hindu tradition, Manasarovar was created by Brahma, god of creation, to provide an appropriate place for religious rituals. 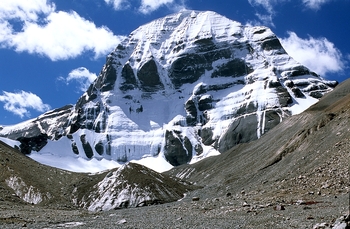 It is said that he had 12 sons, who were holy men and performed rituals and austerities on the dry land at the site. To give them a more suitable place to earn merit, Brahma created the beautiful Lake Mansarovar. The lake’s Indian name derives from this legend: Brahma had a mind (manas) to create a lake (sarowar). For Hindus, a circumambulation of Mount Kailash and a dip in the cold waters of Lake Mansarowar removes the sins of all lifetimes, bringing salvation from reincarnation. Buddhists also associate the lake to the legendary lake known as Anavatapta in Sanskrit and Anotatta in Pali, where Queen Maya is believed to have conceived Buddha. The lake has a few monasteries on its shores. The most notable of which is the ancient Chiu Gompa Monastery, which has been built right onto a steep hill. It looks as if it has been carved right out of the rock. Lake is very popular in Buddhist literature and associate with many teachings and stories in Buddhism. 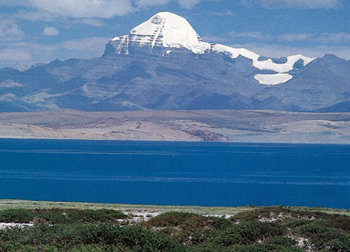 Lord Buddha used to stay and meditate near this great lake for several occasions. It is a saying that famous Uturu-kuru divaina (island or mountain range) was nearby the Anavatapta vila. However, more evidence show that Uturu-kuru divaina was Kuril Islands kuril islands, as the sanskrit meaning of Uturu-kuru is Northern-men as Kur meaning man, in Ainu language. There were once eight Buddhist monasteries around the lake, symbolizing the Wheel of Life. Pilgrims circumambulated the lake, visiting each of the monasteries along the way, representing a turn of the wheel. Most of the monasteries have now disappeared (the most notable survivor being Chiu Gompa), but Buddhists still make the pilgrimage around the sacred lake.