Amarnath temple is located in the Indian state of Jammu and Kashmir and situated on Mount Amarnath, the Amarnath caves, one of the most famous shrines in Hinduism and is dedicated to the god Shiva.The shrine is said to be over 5,000 years old. Inside the main Amarnath cave lies an ice stalagmite resembling the Shiva Linga. An enshrined image of ice naturally formed in a cylindrical form which resembles Lord Shiva-Linga, begins to take its shape on the first day of the bright half of the month and reaches its full size on the full moon day (Poornima). After getting its fullest shape, it begins to wane and disappear on the new moon day. 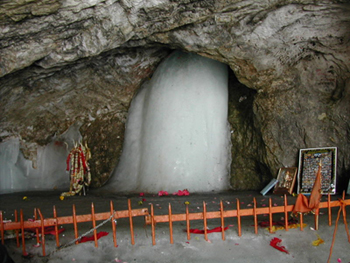 The cave is situated at an altitude of 3,888 m (12,756 ft),[2] about 141 km (88 mi) from Srinagar, the capital of Jammu and Kashmir. The Central Reserve Police Force, Indian Army and Indian Paramilitary Forces maintain a strong presence in the region due to security concerns. There is no clear cut information of the discovery of the cave. The credit of discovery goes to a shepherd (Gujar) Buta Malik, it is said that he was given a bag full of coal by a saint. When the shepherd opened to see in his house it was a bag full of gold. The happy shepherd went back to thank the saint but found a cave with a lingam inside it. . Then onwards this place has become the sacred place of Pilgrimage Another legend says that Kashyap a sage drained the lake of Kashmir and found the cave along with the lingam in it. 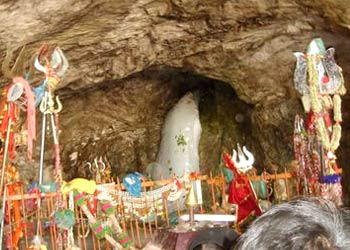 Hindu mythology says that this Amarnath cave is the cave which was used by Lord Shiva to tell about the secret of life and eternity to Goddess Parvathi. He was looking for a secret isolated place to tell this “amar katha” to goddess Parvathi. So he selected this cave. And as a preparation he left his vehicle Nandi, the bull in Pahalgam (Bhail Gaow), released the moon at Chandanwari, snake at Lake Sheshnag, Lord Ganesh at Mahagunas parvat, five elements of life at Panjitarni. Finally he created Rudra (Kalagni) and ordered him to set afire and eliminate every living thing in and around the holy cave. Then Lord Shiva took Parvathi Goddess inside the cave to tell the amar katha. The temple is a popular yatra destination for Hindus – about 400,000 people visit during the 45-day season around the festival of Shravani Mela in July–August, coinciding with the Hindu holy month of Shraavana. The beginning of the annual pilgrimage, called Amarnath Yatra[7], to the Himalayan cave shrine is marked by ‘pratham pujan’ to invoke the blessings of Shri Amarnathji.Devotees generally take the 42 km (26 mi) pilgrimage on foot from the town of Pahalgam, about 96 km (60 mi) from Srinagar, and cover the journey in four to five days. There are two alternate routes to the temple: the longer and more traditional path from Srinagar, and the shorter route from the town of Baltal. Some devotees, particularly the elderly, also ride on horse-back to make the journey. Those who so wish and have the money can now make the journey by helicopter.