Kedarnath is a holy town for hindu relgion. It is a nagar panchayat in Rudraprayag district located in the Indian state of Uttarakhand. Kedarnath is located in the Himalayas, about 3584m above sea level near the head of river Mandakini, and is flanked by breathtaking snow-capped peaks making it most remote site among all four char dham sites. 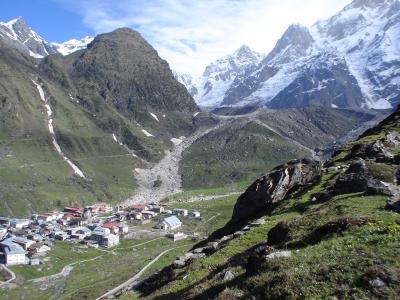 The Kedarnath Temple, and is a popular destination for Hindu pilgrims from all over the world, being one of the four major sites in India’s Chota Char Dham pilgrimage. The temple is believed to have been built by Adi Sankaracharya and is named in honor of King Kedar who ruled in the Satya Yuga. The Kedarnath temple existed from the times of Mahabharata, when the Pandavas are supposed to have pleased Shiva by doing penance in Kedarnath. Kedarnath is located at 30°44’N 79°04’E30.73°N 79.07°E. It has an average elevation of 3,553 metres (11,657 feet). During winter due to heavy snowfall, the temple is open only between the end of April to Kartik Purnima (the autumn full moon). During the winters, the murtis (idols) from Kedarnath temple are brought to Ukhimath and worshipped there for six months. In this region, Lord Shiva is worshipped as Kedarnath, the ‘Lord of Kedar Khand’, the historical name of the region. 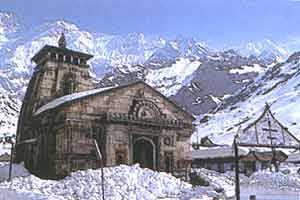 When Palki of Lord Kedarnath is transferred, People shift their settlement too from Kedarnath to nearby villages. Around 360 families of Tirtha Purohit of 55 villages and other nearby villages are dependent on Kedarnath for livelihood. The temple opens on Akshaya Tritiya (April end or first week of May) and closes on Bhai Duj (October end or 1st week of November) due to heavy snowfall and extreme cold weather during winter. In between Rudraprayag and Kedarnath there are several places of pilgrimage such as Agastyamuni, Ukhimath, Phauli- Pasalat Devi Maa, Bamsu (Lamgoundi) Vanasur, Maa Kali at Kalimath, Trijugi Narayan (7 km from Son Prayag) (Where Lord Shankar got married to Goddess Parwati from when the fire of hawan kund is still alive) and Kashi Vishwanath at Guptakashi.