Rudraksha meaning葉he eye of Rudra [Shiva] is considered to be the most potent manifestation of the Cosmic Force. Rudraksha is a Sanskrit compound consisting of the name Rudra (“Shiva”) and aksha (“eye”).Rudraksha is a large evergreen broad-leaved tree whose seed is traditionally used for prayer beads in Hinduism. These beads are the seeds of the Rudraksha fruit obtained from Rudraksha trees. The Rudraksha tree is botanically known as ELAEOCARPUS GANITRUS ROXB. Its English name is UTRASUM BEAD TREE. Rudraksha seeds are covered by an outer shell of blue color when fully ripe, and for this reason are also known as blueberry beads. The blue color is derived not from pigment but is structural. It is an evergreen tree that grows quickly. 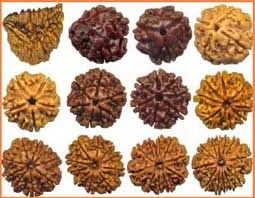 Rudraksha Tree starts bearing fruit in three to four years. As the tree matures, the roots buttress rising up narrowly near the trunk and radiating out along the surface of the ground. There are clefts called Mukhi on the surface of the beads. The number of Mukhi on the surface of a Rudraksha beads helps in determining its quality. According to the number of Mukhi the Rudraksha bead ranges from single face to a several faced bead. Rudraksha grows in the area from the Gangetic Plain in foothills of the Himalayas to South-East Asia, Indonesia, New Guinea to Australia, Guam, and Hawaii. Around 70% of the Rudraksha trees are found in Indonesia, 25% in Nepal and 5% in India. Considered a major stress reliever, reducing circulatory problems and of course as the best beads, the berry (Elaeocarpus Ganitrus) was first spotted in Indonesia and is now grown in Nepal and Hardware. 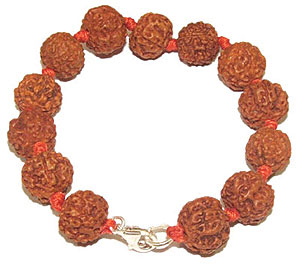 Relegious use of Rudraksha

Rudraksha beads are the material from which malas (108 beads in number) are made. Asians have used Rudraksha beads traditionally. Asian Yogis and Monks found that merely wearing the Rudraksha beads gave them astonishingly tremendous amount of tranquility, concentration that helped them meditate for a long period of time with spectacular control over their mind. Rudraksha is also used for treatment of various diseases in traditional Indian medicine. The seeds show variation in the number of grooves on their surface, and are classified on the basis of the number of divisions that they have. Different qualities are attributed to the rudraksha based on the number of grooves, or ‘faces’ that it has. Rudraksha comes from 1 to 38 mukhis, but Rudraksha of 1 to 14 mukhis are commonly found. The five-faced Rudraksha are found easily and abundantly. One mukhi Rudraksha is extremely rare Rudraksha. Depending upon the availability and production of Rudraksha different prices have been allocated for different mukhi Rudraksha