Vaidyanath Jyotirlinga temple, also known as Baba dham and Baidyanath dham is is located in Deoghar in the Santhal Parganas division of the state of Jharkhand, India and is one among the twelve Jyotirlingas, the most sacred abodes of Shiva. The temple complex consisting of 21 temples with Baba Vaidyanath temple as the main temple, where the Jyotirlinga is installed. Vaidyanath is also considered to be one of the 52 Shakti Pitha shrines of Sati. 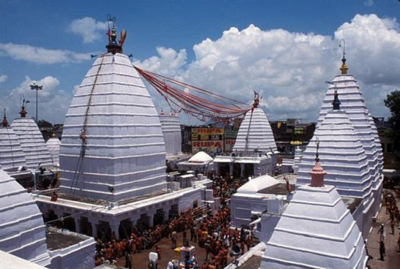 As per hindu mythology, Ravana meditated upon Shiva, and requested him to come over to Sri Lanka, in order that his capital may become invincible. It is said that he attempted to lift Mount Kailash and take it with him to his capital; however Shiva crushed him with his finger, and Ravana prayed to him and sought his mercy, after which Shiva gave him one of the twelve Jyotirlingams with the condition that if it was placed on the ground it would take root immediately. Ravana carried the Jyotirlingam and began his trek back to his capital. Varuna the God of water, entered his belly, and caused him to feel the need to relieve himself. Vishnu then came down in the form of a lad and volunteered to hold the Jyotirlingam as he relieved himself. Before Ravana returned, Vishnu placed the Jyotirlingam on the ground, and it became rooted to the spot. A disappointed Ravana offered severe penances to Shiva here, and cut off nine of his heads. 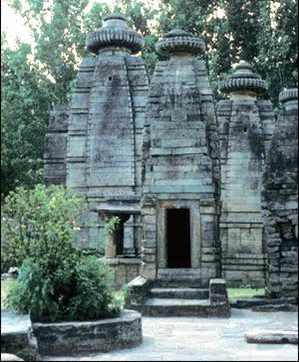 Shiva revived him and joined the heads to the body, as if by the work of a Vaidya or a physician, hence this Jyotirlingam goes by the name Vaidyanath The temple is situated in a spacious courtyard bounded by stone walls. In the temple complex are twenty two other temples. The Baijnath or Vaidyanath temple faces east. The top of the Shiva Lingam is slightly broken, keeping with the legend that it chipped away when Ravana tried to uproot it. Near the temple is the Sivaganga lake. The Chandrakoopa well, near the main entrance is said to have been built and consecrated with water from several thirthams by Ravana.