Trimbakeshwar or Trambakeshwar is an ancient Hindu temple ocated in the town of Trimbak, 28 km from the city of Nashik GPS Reference 20.021944 N, 73.729935 E in the Nashik District of Maharashtra, India. 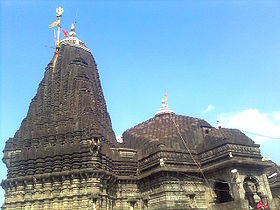 Trimbakeshwar temple is dedicated to Lord Shiva and is one of the twelve Jyotirlingas. The extraordinary feature of the Jyotirlinga located here is its three faces embodying Lord Brahma, Lord Vishnu and Lord Rudra. The linga has started to erode due to excessive use of water on it. As per people, this erosion symbolizes the eroding nature of human society. The Lingas are covered by a jeweled crown which is placed over the Gold Mask of Tridev (Brahma Vishnu Mahesh). The crown is said to be from the age of Pandavs and consists of diamonds, emeralds, and many other precious stones and is displayed every Monday from 4-5 pm. 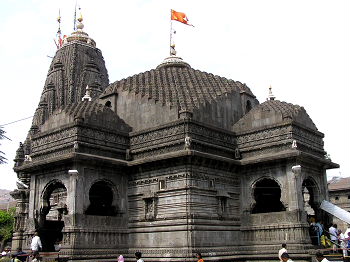 The entire black stone temple is known for its appealing architecture and sculpture and is at the foothills of a mountain called Brahmagiri. It is located at the source of the Godavari River, the longest river in peninsular India. Three sources of the Godavari originate from the Brahmagiri mountain, which is considered sacred within Hinduism, and meets the sea near Rajahmudry. Kusavarta, a kund is considered the symbolic origin of the river Godavari, and revered by Hindus as a sacred bathing place.