Bhimashankar Temple is located in the village of Bhorgiri 50 km north west of Khed, near Pune and is located 127 km away from shivaji nagar(Pune) in the Ghat region of the Sahyadri hills , in India. Bhimashankar is the source of the Bhima river, which flows south east and merges with the Krishna river near Raichur. Bhimashankar in Maharashtra is an ancient shrine, enshrining Bhimashankara one of the 12 Jyotirlingas of Shiva. This temple is closely associated with the legend of Shiva. Eons ago in the dense forests of Dakini, on the lofty ranges of the Sahaydris lived an evil Asura by the name Bhima with his mother Karkati. Compassion and kindness shivered in the presence of Bhima. The divine and the mortals were scared of him alike. But he was confronted by certain questions about his own existence which continuously tormented him. When Bhima could no longer sustain his agony and curiosity, he asked his mother to unveil the mysteries of his life. 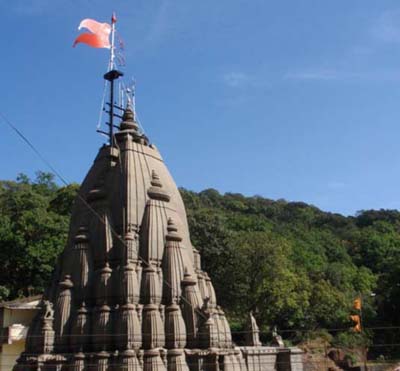 He urged his mother to tell him who his father was and why he had abandoned them in the wilderness of the forest. After much hesitation and with a lingering fear, Karkati his mother, revealed to him that he was the son of the mighty Kumbhakarna, the younger brother of the Lankadheeswara – the mighty all powerful King Ravana of Lanka. Lord Vishnu in his incarnation as Lord Rama annihilated Kumbhakarna. Karkati told Bhima, that his father was killed by Ram in the great war. This infuriated Bhima and he vowed to avenge Lord Vishnu. To achieve this he embarked on a severe penance to please Lord Brahma. The compassionate creator was pleased by the dedicated devotee and granted him immense prowess. This was a terrible mistake. The evil tyrant caused havoc in the three worlds. He defeated King Indra and conquered the heavens. He also defeated a staunch devotee of Lord Shiva – Kamarupeshwar, and put him in the dungeons. He started torturing Rishis and Sadhus. All this angered the Gods. They all along with Lord Brahma beseeched Lord Shiva to come to their rescue. Lord Shiva consoled the Gods and agreed to rescue them from the tyrant. On the other hand Bhima insisted and ordered Kamarupeshwar to worship him instead of Lord Shiva. When Kamarupeshwar denied, the tyrant Bhima raised his sword to strike the Shiva Linga, to which Kamarupeshwar was doing abhishekam and pooja. As soon as Bhima managed to raise his sword, Lord Shiva appeared before him in all his magnificence. Then the terrible war began. The holy sage Narada appeared and requested Lord Shiva to put an end to this war. It was then that Lord Shiva reduced the evil demon to ashes and thus concluded the saga of tyranny. All the Gods and the holy sages present there requested Lord Shiva to make this place his abode. Lord Shiva thus manifested himself in the form of the Bhimashankar Jyotirlingam. It is believed that the sweat that poured forth from Lord Shiva’s body after the battle formed the Bhimarathi River. 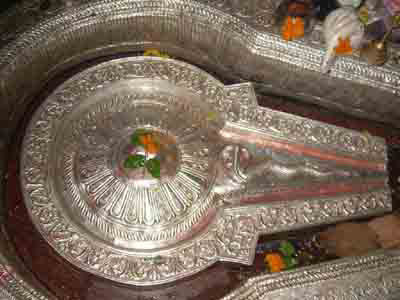 The Bhimashankara temple is a composite of old and the new structures and is built in the Nagara style of architecture. It is a modest temple yet graceful temple and it dates back to mid 18th century. The shikhara of the temple was built by Nana Phadnavis. The great Maratha ruler Shivaji is also said to have made endowments to this temple to facilitate the carrying out, of worship services. As with other Shiva temples in this area, the sanctum is at a lower level. There are Buddha style carvings of Amba-Ambika, Bhootling and Bhimashankar in the hills of Manmod near Bhimashankar. This is at the height of 1034 mtrs. A big size bell in Hemadpanthi structure built by Nana Phadanavis is also a feature of Bhimashankar. Various places that could be visited in Bhimashankar are Hanuman Lake, Gupt Bhimashankar, Origin of River Bhima, Nag Phani, Bombay Point, Sakshi Vinayak and lot more. Bhimashankar is conserve red forest area and wildlife sanctuary where a variety of birds, animals, flowers, plants can be seen. A rare animal “Shekru” can be found in deep woods. Bhimashankar is worth visited for jungle lovers and trekkers as well as for pilgrims.